Celebrating the visual languages of PEOPLE, COMMUNITY, CULTURE, and ENVIRONMENT through the global practice of resist-dye traditions and innovations, keeping in mind authenticity, reciprocity, and networking.

The mission of the International Shibori Symposium (ISS) is to bring together a diverse crowd of scholars, artists and textile enthusiasts for a meaningful exchange of knowledge, practice and tradition. The ISS is held every several years by the World Shibori Network in collaboration with local institutions, organizations and people, in countries across the world. The symposia are comprised of plenary sessions, workshops, and travel programs in order to engage not only an international audience, but the local community.

The World Shibori Network (WSN) was organized during the 1st International Shibori Symposium (ISS) in Nagoya, Japan in 1992. Since then, eight more International Shibori Symposia have been held in different parts of the world – China, Chile, India, France etc. Thanks to the generous support of major national cultural institutions, we have been afforded tremendous opportunities to produce the ISS in these countries. From the beginning, these symposia have been organized solely through international collaboration and volunteer efforts.

The 10th ISS was held in Oaxaca, Mexico, in 2016 co-chaired by Alejandro de Avila Blomberg and Yoshiko I. Wada. The symposium was the 10th international gathering organized by the World Shibori Network in collaboration with the directors and architects of the Jardín Etnobotánico de Oaxaca, Museo de Textil Oaxaca, Centro de las Artes de San Agustín (CASA), and Centro Cultural San Pablo.

9th ISS (2014): From the Silk Road to the World: Compression Resist, Shibori, Clamp-resist and Ikat

The 9th ISS took place in Hangzhou, China, hosted by the China National Silk Museum and World Shibori Network. The symposium was attended by over 250 international participants from over 15 different countries, including a plenary session with keynote speakers; presentation of 72 scholarly papers and technical demonstrations; 2 on-site conservation seminars; artist talks; guided tours of 3 exhibitions; workshops; a 1 day tour to the Hangzhou Art and Crafts Museum and China TUBU store.

The 8th ISS  took place in Hong Kong in December 2011. Event goers expressed the same overriding feeling, one  of inspiration and promise of real innovation amongst our emerging generation of tech-fluent designers. Keynote Speaker and textile visionary, Jack Lenor Larsen, called it “the best of the international shibori symposia to date.”  The 8ISS boasted 8 exhibitions of international and Chinese art in fiber, 8 workshops, a trunk show & info fair, and more than 95 papers presented/posted by speakers. A reported 150 international artists, designers, educators and researchers participated in the event.

The 7th ISS was an exciting site-specific conference + tour program that took the participants from the colored fields of Provence to Lyon’s historical cityscape and silk quarters, ending in the inimitable city of Paris. Highlights along the way include an exhibition of world resist-dye textiles at the Musée du Quai Branly (Paris); viewings  of the historical textile collection of the Musée des Tissus et des Arts Decoratifs (Lyon), one of the great textile museums of the world; the Centre Nationale de Recherche Scientifique (Lyon); and a field study of natural dyes in Provence.

This year‘s theme emphasized the importance of integrating handcrafts into everyday living if we hope to protect our cultural ecosystems.

The 6th ISS was held in Tokyo, Japan in May 2005. Exploring the relationship between the work of craft and human happiness was the focus, aptly called “Simplicity, Subtlety, Renewal.” The emphasis was on simplicity in materials, subtlety in elegance and texture, renewed use through recycling. Using textiles as a focal point, workshops were conducted using donated fabric scraps of exquisite quality (such as Indian khaadi and Cambodian silk) designed by Christina Kim of dosa and woven in different countries around the world. The workshops also provided opportunities for participants to experience directly the innate joy which comes from working with one’s hands, bringing awareness to the importance of traditional craft in contemporary culture. This event also provided a forum for the viewing and discussion of creative work, ideas, techniques and business opportunities.

The 5th ISS was a 3-day symposium focusing on relationships between traditional and contemporary textile techniques, surface treatments, and contemporary fashion design. Held in Melbourne, Australia, it was a space for practitioners, academics, and interested general public to experience the intermesh between theory and practice and the promotion of discourse and debate relating to exchanges: cultural, technical, sociological, reflective and regional, relating to areas including fashion, textiles, pattern, and surface decoration.

The 4th ISS was showcased in collaboration with The Knitting and Stitching Show, across London, Dublin and Harrogate in Europe. It  featured current
and innovative expressions by established, international artists working with the concept of shibori and focused on sculptural forms, installations and wall pieces. The symposium included  two conferences that culminated with a fashion show entitled Art to Wear – A Shibori Symphony. More than 289 delegates attended he symposium from Australia, Bangladesh, Canada, Denmark, France, Germany, Holland, India, Ireland, Italy, Japan, Netherlands, Norway, Singapore, Sweden, Switzerland, United Kingdom and the United States.

The 3rd ISS, held in Chile proved to be an important step in the  promotion of interest and activities related to textile creation in Chile. The Symposium was tasked with retrieving and bringing to light, the forgotten roots of Pre-Colombian amarras. This enabled the comparison of the amarras to works from places where the system of resist tie and dye method has given life to a strong textile tradition that still exsists today; such as Japanese shibori, Bandhani and Lehariya from India and other techniques from Africa. 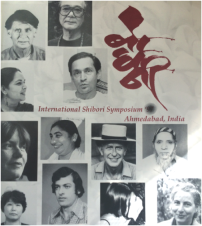 Held in collaboration with National Institute of Design at Ahmedabad, India, the 2nd ISS attempted to understand and bridge the gap between – old and new, craft and art, creative processes and technology. 300 participants from across the world got an opportunity to attend exhibitions showcasing traditional and contemporary shibori, participate in workshops conducted by master craftsmen from Japan and India as well as partake in a cultural immersion of the city. Some of the guest speakers included anthropologist Francoise Cousin, author and Arimatsu native Kozo Takeda, educationist Noorjehan Bilgrami, textile maven Junichi Arai etc.

In November of 1992, the first International Shibori Symposium was organized in the Arimatsu district of Nagoya, Japan. For three days, 850 participants as well as numerous volunteers representing over 20 countries exchanged knowledge and inspiration about shibori.The tremendous success of the 1st ISS gave birth to a organisation called the World Shibori Network, formed by global community of people committed to support, sustain and promote Shibori traditions.